It was early, hot and sticky as we emerged from the tent and our neighbor, a nice 80 year  old man from Germany who did not speak a word in English, simply approached us smiling with a kettle saying “cafe? Cafe?”. He was the sweetest guy we met. Using smoke signs and lost words here and there to communicate we understood he was spending a couple weeks in Saint Andre just to do paragliding  ( very famous activity in the area). Also the couple staying in front of us ( which we had met on our previous stay) invited us for a barbecue event they were planning at the camp site. Very nice the community at Les Isles, however we politely declined as we had different plans…

We planned a nice day on the famous beaches around Saint Tropez and a visit to an old friend of Marie that happened to be living close to Marseille, in Trets. After having coffee with our friendly German neighbor, we took a shower and jumped on the bikes towards Saint Tropez. this time the camping site Les isles would be our base, so we did not have to lose time with the tent and to set up the luggage on and off the bikes.

We rode southbound on the nice N202 and then by Saint Julien en Verdon we turned right, into the D955 along the lake and passing the EDF power station to Castellane again. ( At this stage, I was already pretty familiar with this route)… We passed a few towns along the curvy, scenic and extremely well maintained mountain roads. We were going down the Alps to the Mediterranean sea.

Unfortunately it was possible to see signs of devastation. There had been some bad wild fires in the south region a couple weeks before our trip, we passed really scorched areas where the fire passed by burning everything around leaving that burnt wood odor in the air, not a very pleasant scenario to see.

As I rely more on  maps over the bike tank than GPS systems it was very easy to reach the coast, took us about two hours to arrive in Saint Maxime. I wanted to go to Saint Troppez which is not far but the horrendous traffic plus the heat beat us, so we decided to stay at Saint Maxime. There are series of beaches along the coast. On the billboards was saying the water temperature (26 degrees) which was perfect and also a notice warning that medusas populate the sea. After speaking with a life guard he said that it is normal and they be a bit dangerous because some people may develop allergies, luckily on that day there were no reports of medusas on this part of the sea.

We were hungry so we had a nice salad and sandwich at a beach snack bar. It´s understandable why this area is so famous and busy during the summer. It is hot, very pretty, the clean sandy beaches very inviting and the Mediterranean sea simply great and warm… could not wait to jump into the water.

It felt great, I spent ages diving, swimming or simply floating on the sea feeling that light waving on my body and just letting myself relax… at that stage I thought that life could not be better so I made sure I really enjoyed it. 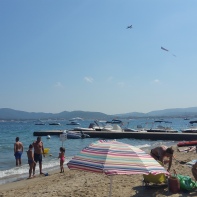 No doubt it is a wealthy region, judging by the villas on the road side and cars around, and especially by the numerous massive yachts around the coast( probably belonging to famous people and possibly corrupt politicians).

We left Saint Maxime around 5 pm to meet Marie´s friend in the little village of Trets which was about an hour and a half away from us, close to Marseille. We did a bit of mountain road and motorway until we arrived, however my other half´s friend house was not easy to reach as it is in the mountain and the access not the best… very tiny road, steep, full of gravel and dusty, not a good environment for two sport bikes, however, we arrived without issues. She lived in a big old  house with massive bedrooms, two floors, swimming pool and a big garden. We ended up having dinner outside, talking and listening to Marie´s friend suggestions for the following day over a bottle of wine.

This site uses Akismet to reduce spam. Learn how your comment data is processed.

Greetings all, I was born in 1976 in Lisbon, Portugal and I am living in London U.K. since 2005. I discovered the world of motorbikes when I was 16, and since then I was never able to quit riding. I am currently a motorcycle instructor working for a motorcycle school in London, teaching and helping out new riders to become safer on the road. I have done a few motorbike trips and I had the idea of a blog a while ago but never got round to do it. This is my first blog and I am not an expert in the art of blogging so there is a possibility that you might find a few mistakes. I will try to do it the best I can covering other aspects about the world of motorcycling and travelling rather than write a simple road diary. Let this be the book about my biker stories and trips and be a source of inspiration for all out there reading my blog!!!!